In 2006, the results of a study conducted by San Francisco’s Women’s Mood and Hormone Clinic created lots of conversations and even more jokes at the expense of women everywhere. The study claimed that women speak an average of 20,000 words per day while men spoke a mere 7,000 words per day.

For a few years, this study was quoted again and again to prove that women talk way more than men do. The problem is that the study was seriously flawed. Years later, the chair of the University of Texas psychology department did his own study and the results of his study are widely accepted as being more accurate than the San Francisco study. According to this study, women average 16,215 words per day while men 15,669. Hmmm…the bottom line is that both men and women love to speak.

Even though Moses never had the results of the study, I imagine he knew firsthand how much men and women love to talk. After all, he spent some 40 years in the wilderness listening to the people he was leading talk and talk and then talk some more. If you read the story, you will find that the people started talking almost as soon as the Exodus began. Poor Moses had to hear every negative, complaining, whining, grumbling word they spoke.

Buried in the Book of Numbers is a short story about one of the many times when those children of God “spoke against God and Moses…” According to the writer, things 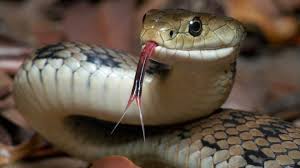 did not work out too well for the children of God that day. In fact, if any of those people suffered from ophidiophobia, they had a very, very bad day!

I would like to think that we have evolved since the Exodus, but have we? Are we really that much different than the wandering children of God? Maybe we know people who love to complain, to argue, to bicker and to gossip. Maybe you have one or two friends that speak words that rather than build up another, they are used to tear down the other. And maybe, just maybe, sometimes you and I use those same words….